Why do I want to visit Corniglia?

I have always been interested in the why of travel: why people want to visit a particular destination, and how that desire comes about. Often it comes from the media, of course, and that is where Travel PR and our rivals come in, working with the press.  But equally often, I think, there are other triggers, many of them subtle: an alluring scene in a film; a random camera shot from TV coverage of a faraway Test Match; the endorsement of a trusted celebrity; an evocative painting.

A very recent trigger for me was a book: Jennifer Egan’s The Invisible Circus.  Having read and relished it, I’m now desperate to visit a small Italian village I’d never previously heard of.  How strange, and wonderful, is that?

Written in 1995, Egan’s debut novel tells the poignant story of Phoebe O’Connor.  The 18-year-old Phoebe’s life in San Francisco is dominated by memories of her enigmatic, flower-child sister, Faith, who died mysteriously eight years ago, aged 17.  Phoebe’s existence is dreamlike, her flitting awareness of the present giving deliberate way to recollections of a supposedly happier past, each nostalgic thought centred on the inspirational, more-beautiful sister she still misses so keenly.

On something of a whim, Phoebe travels to Europe and slowly retraces Faith’s steps towards the eventual scene of her death, a coastal hamlet called Corniglia.  Faith died by falling from the village’s church to the rocks far below, in what was presumed a suicide.  Eventually, Phoebe, together with Faith’s boyfriend of the time, Wolf, reaches Corniglia in the book’s powerful, quixotic denouement, high above the glinting Mediterranean Sea, to try and understand what happened. 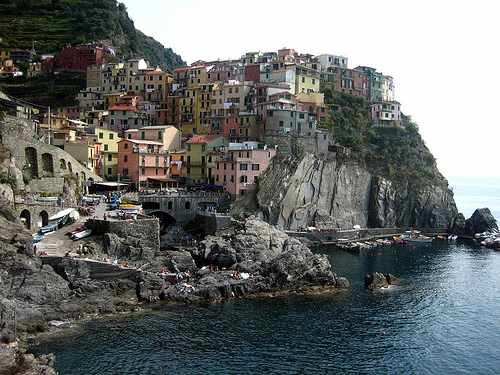 Playing detective is easy in the internetted modern world, and thus Google is able to teach me much about Corniglia.  I learn that it’s part of the Cinque Terre, the third of the scenic coastal stretch’s five ‘lands’.  The quintet are connected only by milk trains and a bumpy track (no roads) called the ‘Blue Path’; to reach Corniglia, visitors must either climb the lardarina, a steep, 33-flight, 382-step brick staircase, or walk a twisting road from the station.

Unlike its four busier neighbours, sleepy Corniglia sits partly (climbing a 100m-high promontory; Phoebe describes it as ‘draped’ over the cliff) above the sea, surrounded by hillside vineyards.  With a population only of around 250, the village itself merely comprises twee lanes clustered around the Via Fieschi.

The more I find out about Corniglia, the more enthused I become.  My Cinque Terre says that “part of the charm of Corniglia is that it isn’t as frequented by tourists as much as the other villages.  It is characterised by its winding, narrow roads and finely crafted terraces. It’s a little bit cooler in climate than the other towns, it has a few restaurants and always seems to have an abundance of rooms for rent.” How good does that sound?!

As Egan’s story reaches its crescendo, Phoebe and Wolf quickly make for the scene of Faith’s jump: the real-life parish of San Pietro.  Faith mysteriously plunged from a terrace at the back of the church, where land suddenly gives way to sea.  Online photos of this location seem scarce, but I think it’s the one seen in the below screengrab from American TV traveller Rick Steves’ video about Corniglia and the Cinque Terre.  I badly want to see this terrace, and Corniglia as a whole, for myself. (blog continues below…)

But why – why exactly?  In part, it’s simply because Corniglia sounds like a lovely place, and I like lovely places.  And because this is Italy, and I love Italy in general.  And because it’s a little obscure, and that suits my personality – I’m never too interested in too-classic tourist destinations.

Yet it’s also, I think, because I absolutely adore this book and consequently crave a pilgrimage of sorts.  I was sad when I finished the novel, and had to move on; but visiting Corniglia would allow me not to move on, and instead to prolong the novel’s spell, to try and delve deeper into its story (just as, in fact, Phoebe tried to delve deeper into the facts of Faith’s demise by visiting Corniglia).  I’m not sure if that’s sad or not.