Stay in a Stately Home fit for the Crawley family

Featuring many original cast members, Downton Abbey, the film, launches in UK cinemas on Friday 13th September. Why not head to a grand stately home or a lavish country house hotel and enjoy your own aristocratic experience?  Here are just some of the options available with Pride of Britain Hotels:

Once home to Louis XVIII, the exiled King of France, and used as a training ground for British and American forces during the Second World War, Hartwell House in Buckinghamshire is steeped in history. Downton Abbey’s creator, Julian Fellowes, has stayed at the Grade I listed 17th century stately home, set in 90 acres of gardens. Situated at the top of the main Jacobean staircase, the King’s Bedroom was occupied by Louis XVIII from 1809 – 1814 and guests can sleep in an antique four poster bed and admire the same uninterrupted views that the King of France enjoyed over 200 years ago. A night’s stay at Hartwell House costs from £200 per room (two sharing), including full English breakfast and use of the spa.

Set in 275 acres of countryside within Dartmoor National Park, Bovey Castle is a glamorous Devonshire retreat with sweeping views over the surrounding countryside. The grand former manor house has ornate ceilings, wood-panelled walls and vast roaring fires. The hotel boasts 60 lavish bedrooms, 22 lodges, an 18-hole championship golf course, tennis courts and an Elan Spa complete with an Art Deco swimming pool. With its own deer park, the estate also offers country pursuits including falconry, cider and sloe gin-making. Its flagship restaurant, the Great Western, is overseen by talented Head Chef Mark Budd and is the proud holder of 3 AA Rosettes for culinary excellence. A night’s stay at Bovey Castle costs from £179 per room (two sharing), on a room-only basis.

Set in formal gardens and parkland, Grantley Hall is a striking 17th century Georgian mansion, which has just emerged from an extensive four-year renovation project. The luxury hotel and wellness retreat’s interiors combine eclectic artwork and tropical foliage with impeccable period features (cornicing, oak panelling and marble fireplaces). There are 47 sumptuous rooms, including Royal and Presidential Suites, and several restaurants and bars including flagship dining room Shaun Rankin at Grantley Hall. Guests can relax in the Three Graces Spa with its marble-lined swimming pool and hi-tech gym and wellness area. A night’s stay at Grantley Hall costs from £350 per room (two sharing), including full Yorkshire breakfast and use of the spa and gym.

Standing high above the dramatic Ayrshire coast in the southwest of Scotland’s historic lowlands, Glenapp Castle is a family-owned baronial castle set in an area of outstanding natural beauty, complete with fairy-tale turrets and oak-panelled rooms. Bedrooms are individually styled with carefully-sourced furnishings, fabrics, antiques and art, and all feature open fires for the winter months. There are numerous activities including a Hebridean Sea Safari with butler on hand, clay-pigeon shooting, falconry displays, croquet, wildlife photography and foraging. A night’s stay at Glenapp Castle costs from £245 per room (two sharing), including full English breakfast and use of the spa.

Dating back to 1720, Lucknam Park is a beautiful Palladian mansion which sits in 500 acres of parkland just six miles from the Georgian city of Bath. The hotel has 42 individually-designed bedrooms and suites – some of the rooms in the main house enjoy four-poster beds, chandeliers and open fireplaces. Restaurant Hywel Jones serves Michelin-starred cuisine and there is a superb spa with brasserie, an Equestrian Centre and a cookery school. A night’s stay at Lucknam Park costs from £320 per night (two sharing) including use of the spa. 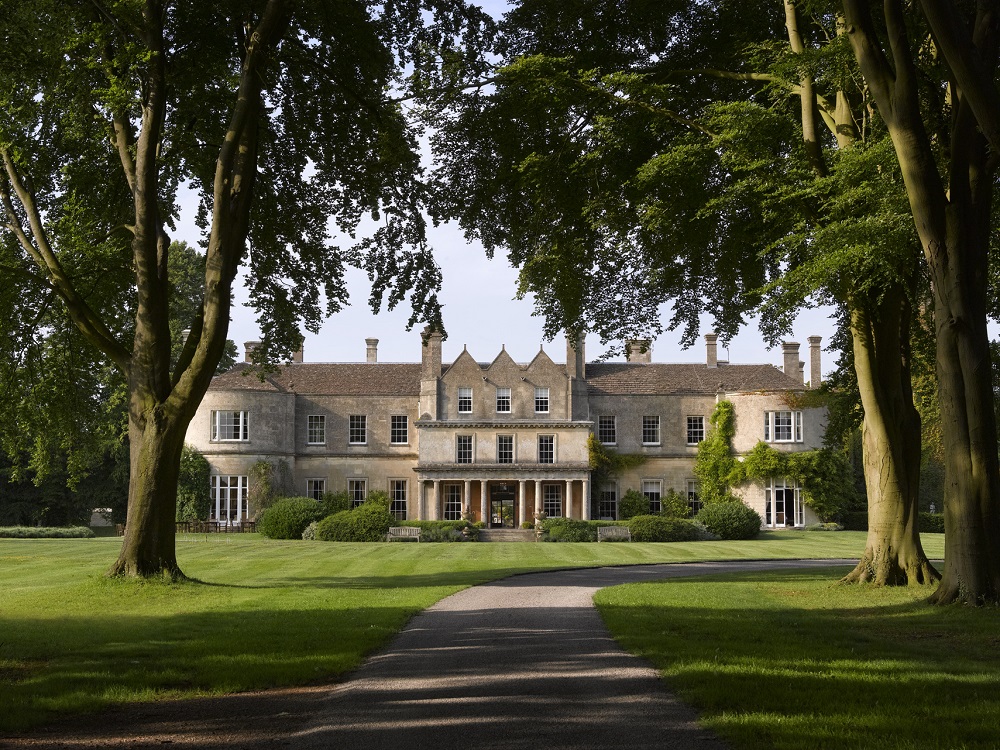 One of the most familiar filming locations in Downton Abbey is Highclere Castle, in Berkshire. Stay seven miles away at The Vineyard, the ultimate destination for lovers of fine wine and gastronomy, complete with a 30,000-bottle wine cellar. The hotel’s 49 bedrooms have been named after iconic wines from around the world and its seven-course Tasting Menu is served with paired wines inspired by the Judgement of Paris blind tasting of 1976. There is also a relaxing spa offering over 50 spa treatments. A night’s stay at The Vineyard costs from £315 per night (two sharing, room only) including use of the spa.

To book a stay at any of the 50 hotels within the collection, contact Pride of Britain Hotels (0800 089 3929, www.prideofbritainhotels.com).*Pride of Britain Hotels’ Best Rate Guarantee ensures the lowest available rates at each member
hotel. Should a lower rate be publicly available online, within 24 hours of booking, for the same date(s) and with the same terms and conditions, the member hotel will be pleased to honour the lower rate.