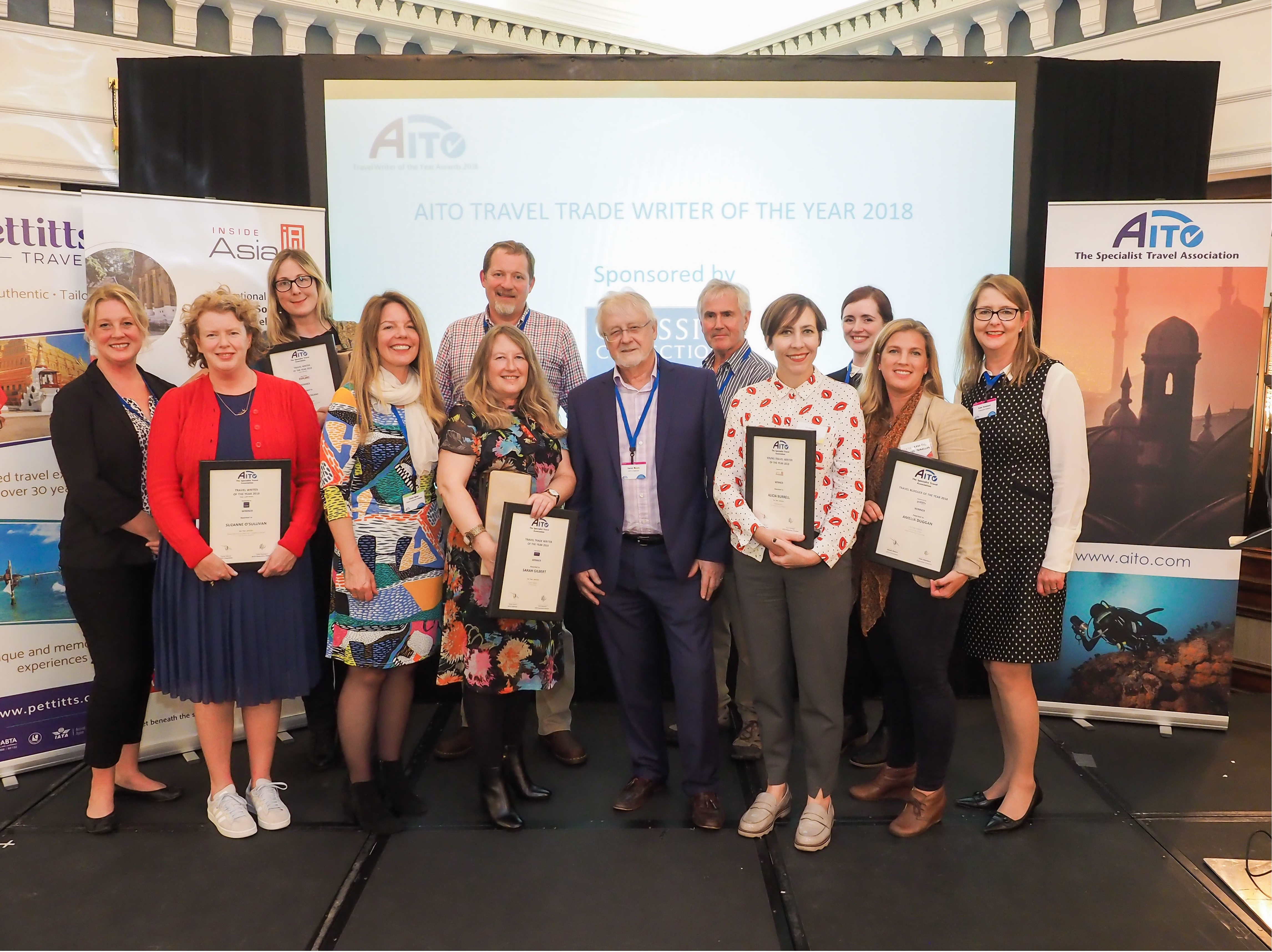 AITO (www.aito.com), under its newly-unveiled strapline, The Specialist Travel Association, has just announced the results of its 22nd Travel Writer of the Year awards. Over 250 high-calibre articles were submitted by a wide range of writers, from freelancers to travel editors, across both trade and consumer press, print and online.

Five Travel Writer of the Year awards –  with an overall winner and two runners-up in each category – were presented yesterday (see below). The judges reviewed entries according to four criteria, seeking copy that was inspirational, informative, interesting and well-written. The first round of marking was judged by 17 AITO members; the second by a team of six judges from the wider industry.

AITO Travel Writer of the Year

This is the most hotly contested award and some of the most respected travel journalists in the industry have featured on the roll of honour, which recognises excellence in the huge field of travel writing.

The AITO Travel Writer of the Year Over 1,500 words award went to

Suzanne O’Sullivan for her piece Going Off Grid on Indonesia’s Forgotten Islands for The Telegraph Magazine. One judge commented that “it gave a real feeling of the joy of exploration”. Another described it as “beguiling and sensitive; a beautiful piece of writing”. Suzanne received £500 in cash together with a bottle of champagne.

In second place was Adrian Phillips for his piece The Hothouse Heart of the Jungle, published in National Geographic Traveller. It was an atmospheric, evocative piece about a journey into the Yasuni National Park in Ecuador.

In third place was Michelle Jana Chan for her uplifting and incisive piece, Primal Green, on the gorillas of Rwanda, published in Vanity Fair.

In first place, winning the AITO Travel Writer of the Year Under 1,500 words award, was Hannah McKeand for her piece A World in a Grain of Sand for SUITCASE Magazine. A first-time win for the polar explorer, her reflective piece on The Selima Sand Sheet, the vast desert spanning the borders between Egypt and Sudan, was described by one judge as “a heartfelt, highly personal piece, transcending the norm for travel journalism”. Another judge said it was “haunting and wonderfully descriptive”. Hannah received a cash award of £500 together with a bottle of champagne.

In second place, for his perceptive and balanced view of modern-day Haiti, was Ian Belcher for his article The Alternative to the Caribbean, published in luxury title Brummell Magazine.

In third place was Matt Hampton for his article From Paris to the Sea on Two Wheels, published in The Times. It was a witty article charting the Veloscenic, a continuous cycleway stretching from Paris to Mont St Michel on the Normandy coast.

This award celebrates travel writing talent in the under-30s.

In first place was Alicia Burrell for her article Emerald Miles in The Sunday Times Travel Magazine, about setting off solo along the west coast of Ireland’s Wild Atlantic Way. One judge said that “with a lightness of touch, this writer captures the wilderness, colours and water of Ireland’s Atlantic coast”. Another described it as “a well-worded, lyrical read”. Alicia received a cash award of £350 together with a bottle of champagne.

In second place, with her article Chile: Patagonia Indomita, in National Geographic Traveller, was Amelia Duggan.

In third place, with his article Finland’s Northernmost Region, in The Telegraph Magazine, was Guy Kelly.

This award recognises the technical writing abilities of travel trade writers – including the understanding of complex travel industry issues that is required of them on occasion.

In first place was Sarah Gilbert for her piece entitled Scenic Safaris in Travel Weekly. Judges described the article as “a panoramic but detailed overview of wildlife conservation that allows the experts to speak; outstanding” and “inspirational.” Sarah received a cash award of £250 together with a bottle of champagne.

In joint second place were Jessica Pook for her article entitled Falling for Northern Japan, featured in Selling Travel, and Laura Gelder for her piece Deep Blue Something, which described her top diving destinations and was also published in Selling Travel.

In third place was Tamara Hinson for her article Singapore: Go Green, featured in Travel Weekly.

This category recognises the burgeoning influence of travel bloggers and their role within the travel writing community.

In first place was Amelia Duggan for her blog post, entitled Port in the Storm, from the National Geographic Traveller blog, which took the reader on a journey through Porto. One judge said “very atmospheric: I was travelling with the writer.” Amelia received a cash award of £250 together with a bottle of champagne.

In second place was an article entitled An Afternoon Sail to the Shiants with Sea Harris by Kathryn MacLeod, written for her blog Stories My Suitcase Could Tell.

In third place was Kerry Christiani for her piece A Taste of Wales: stories worth savouring, published on her blog Small World.

Chairman of AITO, Derek Moore, said “There has been an incredibly high standard of winners once again this year, and we’d like to thank all of the writers who entered the awards and, of course, to congratulate the worthy winners.

“It’s a tall order for the judges, but also a very rewarding exercise and a joy to read so many well-crafted examples of great of travel writing, where destinations are brought to life on a page and readers are taken on fascinating journeys and all manner of adventures.

“I would like to say a special thanks to the five sponsors who contributed the very welcome cash prizes for the first-place winners – Classic Collection, Explore, Inside Asia, On Foot Holidays and Pettitts. And thanks are also due to the 17 AITO members who kindly contributed their time and expertise to act as judges for the first round of these awards – not to mention the six second-round judges, who, in teams of two, carefully read and re-read the shortlisted entries using the chosen judging criteria to come up with the top articles.”

For further information on AITO’s Travel Writer of the Year Awards, visit www.aito.com.

Outbound travel pushed to the brink by government’s inaction

AITO confirms that Cities Direct has ceased to trade as of 7th September, 2020

We’ve found Travel PR’s knowledge of, and passion for, the UK travel industry to be invaluable as we build our media relations and profile. They work as an extension of our team and always offer sound advice, never more so than throughout the pandemic.

The Travel Chapter (including holidaycottages.co.uk and Canine Cottages)